A market rally that began November 9th and has broken through a couple of 1,000-point barriers is still on a roll at 21271, up 8 percent this year. President Trump has received, and takes whenever he can, much credit for the market’s movement.

But as the market rises, Trump’s approval rating falls. His latest average rating in RealClearPolitics is 39 percent approval, with a number of polls out of the field on Tuesday, June 6th that have him between 34 to 40 percent. And although it’s too early to judge if former FBI Director Comey’s testimony will drive the polls down, the number of ongoing investigations by Congress and the Special Counsel will likely continue the controversy.

Major challenge to the president is the gridlock that is affecting his legislative agenda, at least partially caused by the political space being taken by the collusion and obstruction investigations. 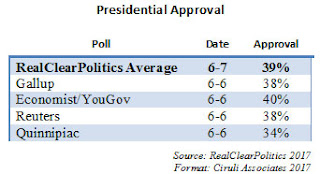 Market and Trump Disengage
It was initially assumed the stock market rally would accrue to the President’s benefit. And indeed there was general euphoria related to hope for improvements in the economy and jobs that appeared to be helping Trump. It reflected optimism, perhaps unrealistic, that health care and tax reform were doable in 2017. Possibly, even an infrastructure program had a chance.

The market rally is now far more broad-based. The technology run-up is being accompanied by stock gains across the board. But, Trump support has narrowed. He still holds support from most rank and file Republicans, his fellow Republicans on the Hill and much of the business class. But, that produces only the 35 to 40 percent of support reported. He won’t be impeached, but there are many very nervous Republican incumbent congresspersons.
Posted by Floyd Ciruli at 11:00:00 AM