As President Trump continues to accumulate adversaries (now add most of Europe) and languishes with his steadfast base of 35 to 40 percent of the electorate, new opponents are emerging who maybe more dangerous to his 2020 plans than the usual Democratic D.C. crowd.

Jerry Brown, 79 years old, the term-limited Democratic governor of California is taking the lead position on climate change opposition. He has a credible track record on the issue, is governor of the largest state, and is moving to organize a defense of the accord and call for local action. He is going to China (a new leader on climate change) and talking to a host of governors and other political leaders about a climate change summit.

Brown is a special problem for Trump and Republicans because he is not the typical Democratic Party leader. Democratic governors tend to be more responsible on finances and less radical in their partisan rhetoric. Brown, for example, is usually the adult in the room for his Democratic, interest group-dominated state legislature. Even his approach to Trump and his administration tends to be less resistance rage and more calm opposition.

Although Dianne Feinstein’s (83 years old) senate seat may be open in 2018, he’s unlikely to consider it. But even without an office, he is a potent adversary for Trump and the environmental agenda. 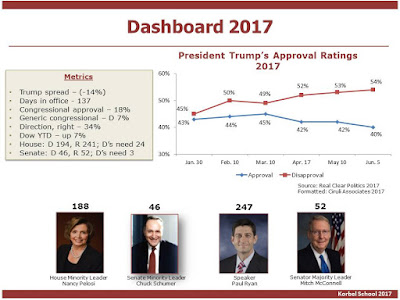