The State of the Republican Race

With 18 candidates, including Donald Trump, the Republican nominations look like pure anarchy. But, there are a few metrics that line up the top candidates with the known dates for political drama: a series of debates starting August 6 on Fox News (5 debates in 2015, including Colorado on October 28) and the caucus primary season beginning February in Iowa, with super delegate events in March.

As of July 29, the following are the polls and money as we know them for the top candidates. 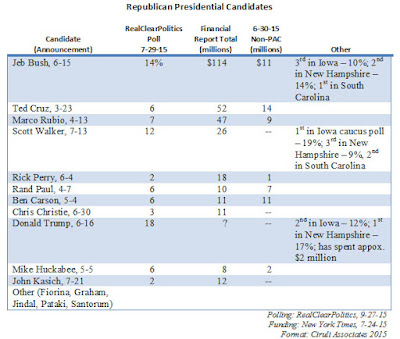 It is estimated that it will require $60 million to mount a sufficient media and field campaign to get into the mid-March delegate selections.