After hitting a low of 44 percent approval a year ago, Barack Obama has slowly recovered to 50 percent – the historic re-election threshold.

Obama began at 62 percent on February 1, 2009 immediately after his inauguration, but dropped steadily to 46 percent in the 2010 “shellacking” November elections.

The summer of 2011 was even worse for the administration.  The debt ceiling crisis made them look disorganized and Obama weak.

But, in the fall of 2011, the administration repositioned itself as the campaign took over and the themes of social justice and jobs came to shape the messages and actions of the administration.  In December 2011, it was Republicans in Congress who looked weak in the conflict over unemployment extension.

Observation:  Looking at Obama’s approval trend, it appears he’s done better as a candidate than a president. 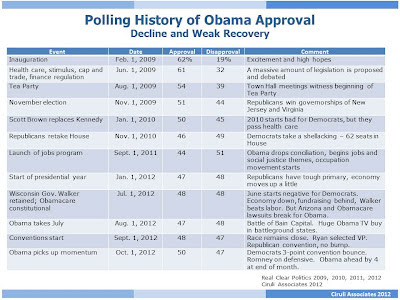