Major Benefit of Romney Win – He Moves the Base

Gallup reports Mitt Romney’s win in his first debate with President Obama was at a record level.  Seventy-two percent of all voters who watched the debate believed he “did a better job.”

Even 49 percent of Democrats thought he won, along with 70 percent of the all-important independents. 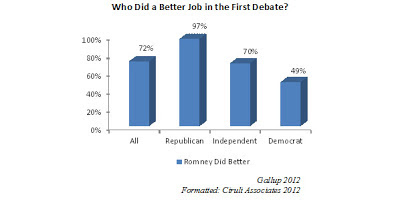 But, most importantly, it’s a game changer for the respective bases of each party.

As the Los Angeles Times reported:

“‘It’s hard to tell if it is a game changer at the level of ... undecided voters.  It’s clearly a game changer for the bases of both parties,’ said Floyd Ciruli, a Denver pollster.”

I addressed two Republican-leaning business groups Thursday, and the change in their mood was palpable.

“‘They stood up and cheered when I said, “Well, was last night a good night for you?”  They are revived,’ Ciruli said.  Previously, ‘they were very dispirited in what they saw as a sort of lackluster and gaffe-prone September, and now they feel tremendous vigor.’”  (Oct. 5, 2012)

Democrats were equally affected, and while the initial emotions were disbelief and denial, the base snapped to attention to realize that there is still a contested election.
Again, as the Los Angeles Times reported:

“‘I also have received and seen a number of emails, traffic between Democrats saying, “Gosh, we can’t be taking this for granted, there’s a few more days left for voter registration,”’ Ciruli said.  ‘In other words, a bit of overconfidence has been diminished in the Democratic campaign.’”

See Los Angeles Times: Pollster sees a game change – not among undecided, but in the base
Posted by Floyd Ciruli at 12:58:00 PM