Colorado may be a battleground presidential state, but it’s not clear the three most contested congressional races are benefiting from the wave of anger that is endangering the incumbents – two Republicans and one Democrat.

The latest generic voter test for congressional races show a tie between Republican and Democratic candidates.  In 2006 and 2008, Democrats had a more than ten-point advantage, signaling their taking the House in 2006 and adding seats in 2008.  The Republican wave in 2010 had a final seven-point advantage in the generic test. 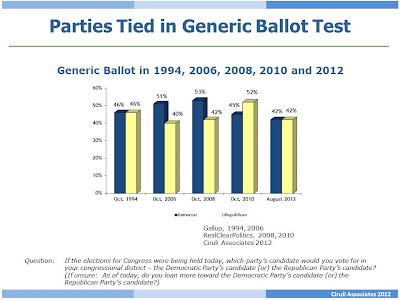 The closeness of generic polling signals that, although Democrats may pick up some seats, they are not likely to sweep 25 needed to take the House unless they win every close election.

Democratic strategists James Carville and Stan Greenberg claim to have polling data that shows Democratic candidates benefiting from a surge for Obama and a decline in the image of the Republican brand, including in Colorado.

However, Democratic challengers of Republican incumbents Scott Tipton (3rd CD) and Mike Coffman (6th CD) may expect some national money, but little help from the party label, short of an unexpected big win by President Obama.  In fact, in the two seats, Obama’s ground troops are welcome, but the candidates have been mostly running independent of the national ticket.

Challengers, including Republican Joe Coors in the 7th CD, will have to make their own good fortune.

See:
Denver Post:  Three races make Colorado a Congressional battleground
Democracy Corps:  100 days out: From serious vulnerability to a wave election
Washington Post – The Fix:  House Democrats not riding a 2012 wave, but GOP tide could roll back
Posted by Floyd Ciruli at 10:20:00 AM