Will There be a Robert’s Bump? Tie Race at Start of July

President Obama begins the final four months of the campaign with the same slight advantage he’s held for months.

Fresh off his June 28 Supreme Court win, which saved his legislative legacy, but after a tough month overall (bad job numbers, Wisconsin loss, behind in fundraising, etc.), will the health care decision provide a lift for Obama?

On July 1, Obama is below 50 percent in both approval and head-to-head with Mitt Romney in the Real Clear Politics poll average. It reinforces that the race will be decided in a handful of states and overall by a couple of percentage points. 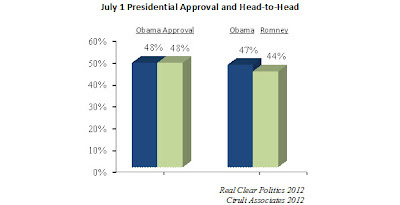 In Colorado, the current polling average is 3 percent for Obama, tracking the national trend. Expect Colorado to be in the final toss-up category.
Posted by Floyd Ciruli at 11:26:00 AM