Nate Silver, the political analyst for the New York Times, believes control of the U.S. Senate is a toss up, with Democrats’ chances improving since early 2012.

Silver rates four seats in the West as competitive or toss-ups:  Montana, which is held by a Democratic incumbent (Tester), and Nevada, held by a Republican (Heller), are the toss-ups.  He believes New Mexico, which leans Democrat, and Arizona, which leans Republican, are competitive.  Both are open seats.

The only other seat even slightly competitive in Silver’s view is an open seat in Washington, which he labels likely Democratic. 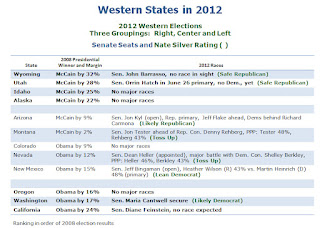 Silver and I agree (see blog of May 15).  As he points out, the presidential race in the respective states could make a difference.  A Mitt Romney strong showing in Montana or Nevada will likely help the Republican Senate candidates, as would a strong Barack Obama win in Nevada or New Mexico help the Democrats.