If Mitt Romney continues gathering delegates at his 55 percent rate, he will have 1,147 delegates after the June 6 primary, which includes New Jersey and California.
There tends to be a bandwagon effect as it becomes clear the non-frontrunners can’t win.  Newt Gingrich is having a hard time attracting a press following, except as a political deathwatch.  Rick Santorum’s campaign is increasingly less credible and his statements more extreme and hostile.  It reminds observers of his 2006 Pennsylvania 18-point crash and burn experience.
The questions becomes:  Can the Republicans get over it and shake off this nomination fight and can Romney get this back to a two-point race it was in January? 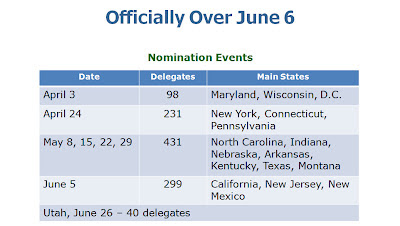