Romney Leads, But is Not a Lock

More than one-half of the Republican Party active voters are consistently resisting their frontrunner, Mitt Romney.  As of mid-November, Newt Gingrich seems to be mounting a strong challenge.  But, at various points in the last two months, Herman Cain and Rick Perry have taken the lead.
The first nomination event is now less than two months on January 3 in Iowa.  Romney leads, and has the money and the campaign discipline to stay the course.  But, the electorate is volatile, and if he loses key primaries after New Hampshire, which he appears to have sewed up, his momentum could collapse. 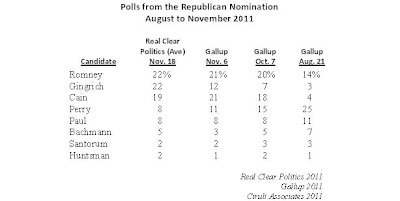 Three months of polls confirm Mitt Romney has only about one-quarter of the party with him; the rest of active Republican voters prefer a perceived more conservative candidate or are undecided.  (Note a consistent 8% to 10% support libertarian Ron Paul).  Romney’s hold is on the moderate and more pragmatic wing of the party, leaving the much larger conservative wing ready to attach itself to more conservative candidates.
·         There is no consistent frontrunner at this point.
·         A second or third-tier candidate could still surge before voting begins in January.
·         The early events may not decide it, but likely two contestants will emerge.  At the moment, Romney appears in it, but second-place is unclear.
·         Frontrunners in October don’t necessarily win the nomination.  It has been especially true in the Democratic contests, but the Republicans look more like Democrats this year.
-         2007:  McCain (16%) was behind Giuliani (32%)
-         2007:  Obama (26%) was behind Clinton (47%)
·         Perry’s October Gallup slide was steep and appears difficult to reverse.  Voters didn’t just leave him because of his poor debate performance, but also because they really didn’t like his instate tuition position.
·         Cain’s poll numbers are falling under the media onslaught related to the harassment scandals.  Also, he lacks money and organization for the state-by-state delegate battles.
·         After a disastrous start, Gingrich lingered at below 5 percent through September, but as Perry and Cain have fallen back, his debate performance has grabbed the attention of conservatives and he’s on the move.  Gingrich is a difficult and undisciplined personality, so this may be a short-term boomlet.
See Gallup poll:  Cain’s fall, Gingrich’s rise result in tie for high intensity score
Posted by Floyd Ciruli at 10:15:00 AM