So many interests with a stake in the outcome in the 2011 congressional redistricting have conflicting positions that it is hard to see a compromise possible to avoid political deadlock and subsequent court challenges and a judicial decision.

Although the redistricting process is decided by the Colorado Legislature and Governor, in fact, the process is dominated by the state’s congressional delegation and their staffs with their respective state parties as major stakeholders.

In general, incumbents tend to be very parochial and protective of their registration advantages. The average district with little variation must be 720,000. The 1st CD needs the largest population increase and the 6th CD has the most. There are some other rules about community of interest and ethnic representation, but generally redistricting panels have considerable flexibility.

Republicans have a surplus of votes in the south metro area and El Paso County. Their goal will be to pack more Democrats into Denver (1st CD of DeGette) and the 2nd (Adams, Boulder, Summit, Eagle and portion of Jeffco, etc. of Polis). They would like to add a few Republicans to the newly won 3rd CD (Pueblo and Western Slope of Tipton) and Gardner’s retaken 4th CD (Larimer, Weld and High Plains). One district they could have a chance of winning is Perlmutter’s 7th CD in Jeffco, Adams and Aurora. They would most likely have to wait for Perlmutter to retire, but 20,000 more Republicans or conservative unaffiliateds would put the district in play with a good candidate and/or good year.

Democrats, of course, have the opposite set of opportunities and challenges. One particular Democrat Party problem is that letting Denver’s 1st CD become less Democratic, although making sense for the Party’s overall strategy, would anger liberal and minority interest groups who want to ensure that the next party nominee after DeGette can win a general election, which could be endangered if the district becomes more competitive.

As a reciprocal to the Republican strategy, Democrats would like, as a top priority, to add partisans to the very winnable 3rd CD. Also, the 4th CD, which is becoming more competitive due to the growth of independent voters in Larimer and Weld counties, will be a Democratic target for more voters. The Democratic problem is finding neighboring Democratic partisans they can shift to the 3rd and 4th districts.

Again, conversely to the Republican strategy, Democrats would like to pack even more Republicans into the 5th (El Paso) and 6th (south metro) districts. Unfortunately for Democrats, those two districts have population surpluses and must shed votes. A Democratic strategy might be to shift Boulder voters (in the 2nd CD) to the 4th CD and some surplus Democratic-leaning voters from the 2nd to the 3rd.

Most of these changes will involve multiple shifts and, as a zero sum game, it’s hard to imagine a compromise unless protagonists believe a court decision is more risky. 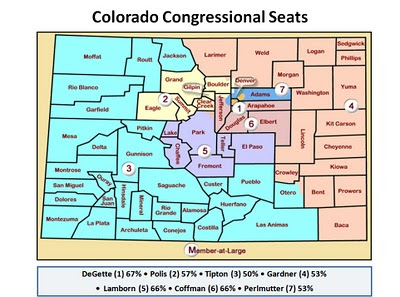