Hickenlooper at Top of Political Field; Tancredo at Bottom

In a newly released poll of Colorado voters, Mayor John Hickenlooper had a 56 percent favorability rating, the highest of eight politicians tested, whereas Tom Tancredo ranked the lowest on the favorability index with a 28 percent rating. 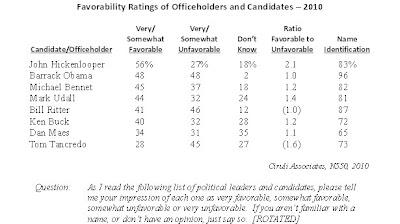 “The favorability of all the politicians tested was low,” said Floyd Ciruli, who conducted the poll. “People are not in a good mood about politics and politicians.”


The statewide survey was conducted by Ciruli Associates with 550 likely Colorado voters from August 19 to 23, 2010. The political questions were a separate section of a survey sponsored by a consortium of grocery and convenience stores. The statistical range of error is ±4.2 percentage points. Ciruli Associates is responsible for the questions and analysis.

The favorability question probed voters’ impressions of officeholders and candidates with no title or description attached to their name. Voters were asked to rank the politicians on a scale from “very favorable” to “very unfavorable”, and encouraged to say if they did not know the person, or just didn’t have an opinion. It is a good test of voter awareness and goodwill toward the elected official and candidate.

• Hickenlooper has had a high favorability rating for much of his political career. He was rated near the top of the field (61% favorable) in 2006, just behind Gov. Bill Owens (63% favorable) as Owens neared the end of his term.

Hickenlooper had a 9 percent unfavorable rating in 2006, which has grown, but is still very low (27%). He had the best positive-to-negative ratio (2-to-1) of the eight current politicians tested in the poll.

• Senator Michael Bennet received 45 percent favorable and 37 percent unfavorable ratings, with 82 percent of voters identifying him. His opponent Ken Buck’s favorability was lower at 40 percent, but his favorable-to-unfavorable ratio was the same as Bennet’s. His name identification was 10 points lower. Generally, in Colorado elections cycles, as a candidate becomes better known, his favorability will usually rise. Of course, Democrats are trying to keep his favorability low by running extensive negative advertising.

• Dan Maes, the Republican candidate for governor, was only recognized by 65 percent of voters, the lowest on the list, and had a 34 percent favorable rating, with 31 percent not favorable. Tom Tancredo was the most polarized politician tested. Three times as many voters rated him “very unfavorable” (32%) as considered him “very favorable” (11%).

• President Obama had only 14 percent of Republicans rating him favorably, but 85 percent of Democrats were positive. Unaffiliated voters, as expected, were in the middle at 52 percent favorable.
Posted by Floyd Ciruli at 3:21:00 PM