This poll points out a few post-primary challenges for Buck. Although both candidates are losing similar numbers of partisans to each other, Bennet is winning the unaffiliated voters 38 percent to 33 percent. More than one-quarter (29%) of unaffiliated voters are undecided. Secondly, there are more Republicans (11%) saying they are undecided than Democrats (9%). 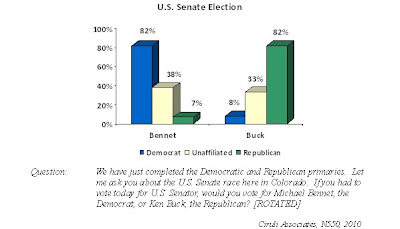 The statewide survey of 550 likely Colorado voters was conducted by Ciruli Associates from August 19 to 23, 2010. The political questions were a separate section of a survey sponsored by a consortium of grocery and convenience stores. The statistical range of error is ±4.2 percentage points. Ciruli Associates is responsible for the questions and analysis.

Some conclusions from the poll:
• President Barack Obama’s job approval rating is a weak 44 percent. A presidential job performance rating below 50 percent is a danger zone for incumbent Democrats. Obama’s approval rating among the crucial unaffiliated voters is 45 percent, among Democrats it is 80 percent, and among Republicans, 11 percent.
• The only region Bennet wins above his 42 percent statewide average is the six-county metro area with 49 percent. He carries only one-third of the rest of the state. Buck wins his home Larimer and Weld counties with 51 percent. He also wins a majority of voters in the South Front Range (51%) and the Western Slope (53%).
• The gender gap favors the Republican candidate. Women back Bennet by 11 points (37% Buck to 48% Bennet); however, Buck carries men by 16 points (51% Buck to 35% Bennet). Buck’s advantage narrows because women dominate the electorate 54 percent to 46 percent.
• Bennet is winning young Baby Boomers and older Generation Xers, but is losing the youngest age cohorts (18 to 34 years old) 31 percent to 43 percent for Buck. He is also losing seniors 39 percent to 51 percent. 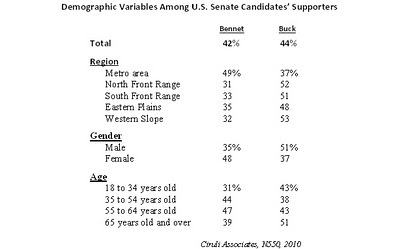 Other Pre-Labor Day Polls
Surveys conducted prior to Labor Day (automatic dial polls) show Buck ahead 2 to 9 points, with the exception of a September 1 poll that had Bennet ahead by 3 points.

With the Senate race tightening and the race for Governor abandoned by many conservatives, the coming days and weeks promise an expensive, hard-hitting, take-no-prisoners battle to determine who will be the junior senator from Colorado.
Posted by Floyd Ciruli at 3:03:00 PM