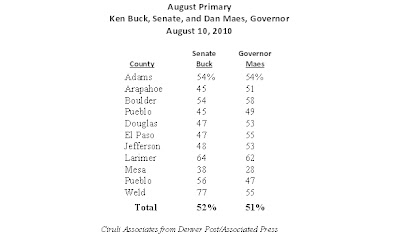 Norton did well with establishment Republicans in the Denver metro area, carrying Arapahoe, Denver, Douglas and Jefferson counties. Buck, who won by a 13,000-vote margin, carried most non-Front Range counties and had huge wins in Larimer and Weld counties (Buck took 51 out of the state’s 64 counties).
Posted by Floyd Ciruli at 2:25:00 PM