The Gallup poll just published President Obama’s cumulative approval rating for each of the 50 states. The tracking poll average includes more than 80,000 interviews and ran from the inauguration (Jan. 21) through June 30. His average approval rating was 63 percent over the six months.

The Democratic Party’s goal of turning the interior West into a solid blue region is still a work in progress. Only New Mexico (63%) has support equal to the safe Democratic “left coasts.” Among western states Democrats want to bring into the fold, only Nevada (59%) and Arizona (58%) had averages that were close to Obama’s national average.

Colorado (55%) and Montana (52%) were above 50 percent, but well below Obama’s national average. Colorado had the lowest approval among states in the nation that Obama had carried. And, Colorado is a key battleground, with Democrats defending a governor, U.S. Senator and newly elected Congresswoman. 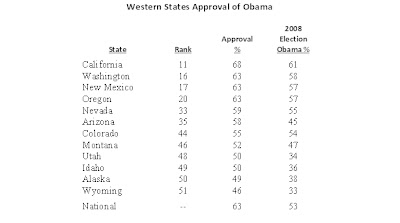