A recent Public Policy Polling poll indicated one-quarter of Colorado voters couldn’t grade his performance. Nearly one-half (45%) couldn’t rate his favorability in January, shortly after his appointment. Although his name identification has greatly increased, the poll showed only 34 percent approved his performance and 41 percent said they disapproved. 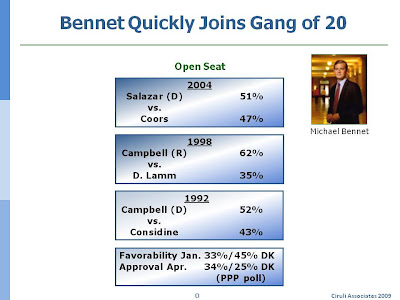 But, Bennet has received favorable Washington media coverage and raised a huge $1.4 million in contributions since his appointment. No doubt, helped by good Washington connections. Bennet’s brother, James, is the editor of the Atlantic, and he helped his boss organize a series of private dinners with the new administration. “A floating group of 12 to 16 journalists with specialists added depending on the subject matter – and the rarified level of access.” Rahm Emanuel, Larry Summers and British PM Gordon Brown have been guests.
Posted by Floyd Ciruli at 1:59:00 PM